Find out the The Liar’s Knot release date below, and don’t forget to check out the ultimate list of upcoming 2021 books and 2022 book releases to discover other new books coming out in 2021, 2022 and beyond. A novel by: M. A. Carrick, M.A. Carrick
Publisher: 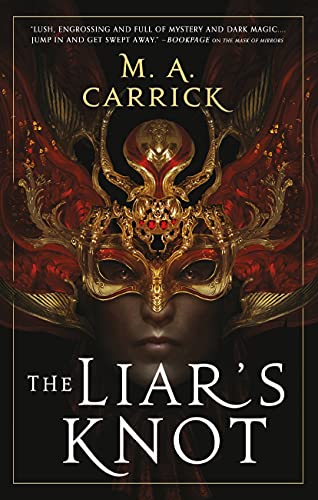 Trust is the thread that binds us . . . and the rope that hangs us.

In Nadezra, peace is as tenuous as a single thread. The ruthless House Indestor has been destroyed, but darkness still weaves through the city’s filthy back alleys and jewel-bright gardens, seen by those who know where to look.

Derossi Vargo has always known. He has sacrificed more than anyone imagines to carve himself a position of power among the nobility, hiding a will of steel behind a velvet smile. He'll be damned if he lets anyone threaten what he's built.

Grey Serrado knows all too well. Bent under the yoke of too many burdens, he fights to protect the city’s most vulnerable. Sooner or later, that fight will demand more than he can give.

And Ren, daughter of no clan, knows best of all. Caught in a knot of lies, torn between her heritage and her aristocratic masquerade, she relies on her gift for reading pattern to survive. And it shows her the web of corruption that traps her city.

But all three have yet to discover just how far that web stretches. And in the end, it will take more than knives to cut themselves free...

Let us know what you think of The Liar’s Knot by M. A. Carrick, M.A. Carrick in the comments below!