This page is dedicated to giving you the latest Brown Girls release information, along with Brown Girls book cover art, synopsis and more.

Find out the Brown Girls release date below, and don’t forget to check out the upcoming 2022 book releases (along with the ultimate list of new 2021 books) to discover other new books coming out in 2022, 2023 and beyond. 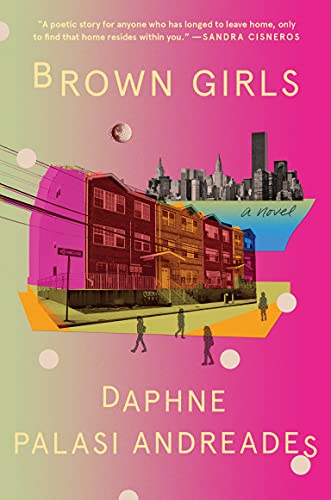 A blazingly original debut novel about a group of friends and their immigrant families from Queens, New York--a tenderly observed, fiercely poetic love letter to a modern generation of brown girls.

"A poetic story for anyone who has longed to leave home, only to find that home resides within you."--Sandra Cisneros

We live in the dregs of Queens, New York, where airplanes fly so low that we are certain they will crush us...

This remarkable story brings you deep into the lives of a group of friends--young women of color growing up in Queens, New York City's most vibrant and eclectic borough. Here, streets echo with languages from all over the globe, subways rumble above dollar stores, trees bloom and topple across sidewalks, and the briny scent of the ocean wafts from Rockaway Beach. Here, girls like Nadira, Gabby, Naz, Trish, Angelique, and many others, attempt to reconcile their immigrant backgrounds with the American culture they come of age in. Here, they become friends for life--or so they vow.

Exuberant and wild, they sing Mariah Carey at the tops of their lungs and roam the streets of The City That Never Sleeps, pine for crushes who pay them no mind--and break the hearts of those who do--all the while trying to heed their mothers' commands to be dutiful daughters, obedient young women. As they age, however, their paths diverge and rifts form between them, as some choose to remain on familiar streets, while others find themselves ascending in the world, drawn to the allure of other skylines, careers, and lovers, beckoned by existences foreign and seemingly at odds with their humble roots.

In musical, evocative prose, Brown Girls illustrates a collective portrait of childhood, motherhood, and beyond, and is an unflinching exploration of race, class, and marginalization in America. It is an account of the forces that bind friends to one another, their families, and communities, and is a powerful depiction of women of color attempting to forge their place in the world. For even as the dueling forces of ambition and loyalty, freedom and marriage, reinvention and stability threaten to divide them, it is to each other--and to Queens--that the girls ultimately return.

Let us know what you think of Brown Girls by Daphne Palasi Andreades in the comments below!