This page is dedicated to giving you the latest Afterparties release information, along with Afterparties book cover art, synopsis and more.

Find out the Afterparties release date below, and don’t forget to check out the ultimate list of upcoming 2021 books to discover other new books coming out in 2021. A novel by: Anthony Veasna So
Publisher: Ecco 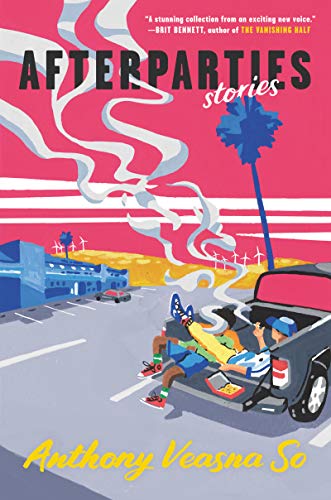 Seamlessly transitioning between the absurd and the tender-hearted, balancing acerbic humour with sharp emotional depth, Afterparties offers an expansive portrait of the lives of Cambodian-Americans. As the children of refugees carve out radical new paths for themselves in California, they shoulder the inherited weight of the Khmer Rouge genocide and grapple with the complexities of race, sexuality, friendship and family.

A high school badminton coach and failing grocery store owner tries to relive his glory days by beating a rising star teenage player. Two drunken brothers attend a wedding afterparty and hatch a plan to expose their shady uncle's snubbing of the bride and groom. A queer love affair sparks between an older tech entrepreneur trying to launch a 'safe space' app and a disillusioned young teacher obsessed with Moby-Dick. And in the sweeping final story, a nine-year-old child learns that his mother survived a racist school shooter.

With nuanced emotional precision, gritty humour and compassionate insight into the intimacy of queer and immigrant communities, the stories in Afterparties deliver an explosive introduction to the work of Anthony Veasna So.

"So (1992–2020) conjures literary magic in his hilarious and insightful posthumous debut, a collection that delves into a tightly knit community of Cambodian-American immigrants in California’s Central Valley. Many of the characters are haunted by memories of genocide—one, an Alzheimer’s and dementia nurse in “Somaly Serey, Serey Somaly,” is inhabited by the spirit of a deceased relative who suffered a life of tragedy under the Khmer Rouge. The protagonist of “Human Development,” meanwhile, negotiates his Khmer heritage on a more quotidian level: While at a beer pong–fueled party with his Stanford friends a few years after graduation (“Why’s the goal of this party to reclaim the culture of closeted frat bros?” he asks), he messages with another Cambodian man on Grindr, then leaves the party to hook up after confirming they aren’t related. What makes the stories so startling is the characters’ ability to embrace life and all its messy beauty despite the darkness of the past. Characters have weddings, play badminton, fall in love, read Moby-Dick, and sometimes quip, surprisingly nonchalantly, about their national traumas—“there were no ice cubes in the genocide!” yells a father in “Three Women of Chuck’s Donuts.” Some leave home (“the asshole of California,” one of them calls it in “Maly, Maly, Maly”); others want to stay, despite how little their region has to offer. After this immersive introduction to the Central Valley community, readers won’t want to leave. Agent: Rob McQuilkin, Massie & McQuilkin Literary."

Let us know what you think of Afterparties by Anthony Veasna So in the comments below!