Bookmark this page and check back often to find your perfect Kwei Quartey new book and be sure to explore more book releases coming out in 2021, 2022 and beyond. Find the Kwei Quartey next books below:

Kwei Quartey is a crime fiction writer and physician based in Pasadena, California. In 2018, having practiced medicine for more than 15 years while simultaneously working as a writer, Quartey finally retired from medical practice to become a full-time novelist. Prior to that, though, he had balanced the two professions by dedicating the early morning hours to writing before beginning each day in his clinic.

Quartey was born in Ghana, West Africa, to a Ghanaian father and Black American mother, both of whom were lecturers at the University of Ghana. Quartey describes how his family’s home was full of hundreds of books, both fiction and nonfiction, which inspired him to write novellas as early as the age of eight or nine. By then, Quartey was certain he wanted to be an author.

But his interests shifted by the time he was a teenager, when he decided he wanted to be a doctor. Quartey began on a science-to-medicine track in secondary school. After the death of his father, Quartey’s mother returned to the United States. By then, Quartey had already begun medical school in Ghana. Transferring to a medical school in the United States wasn’t easy, but he successfully gained admission to Howard University College of Medicine in Washington, DC.

After graduation from his residency training in Internal Medicine, Kwei Quartey returned to his love of writing. He went to a UCLA extension course in creative writing, and wrote two novels while in a writing group that met every Wednesday evening. But it would be a few years yet before Quartey would create the Inspector Darko Dawson series.

As a crime fiction writer, Kwei made the Los Angeles Times Bestseller List in 2009. The following year, the GOG National Book Club voted him Best Male Author. The five Inspector Darko Dawson novels, set in Ghana, are WIFE OF THE GODS, CHILDREN OF THE STREET, MURDER AT CAPE THREE POINTS, GOLD OF OUR FATHERS, and DEATH BY HIS GRACE.

Two novels, KAMILA and DEATH AT THE VOYAGER HOTEL (e-book) are non-Darko books.

In January 2020, Quartey’s new detective series launched to critical acclaim with THE MISSING AMERICAN, the debut of the Emma Djan Investigations and the introduction of the first West African female private eye in fiction. The second in the series, SLEEP WELL, MY LADY, was released January 12, 2021, immediately garnering attention for its unusual style of time shifts in relation to the crime. 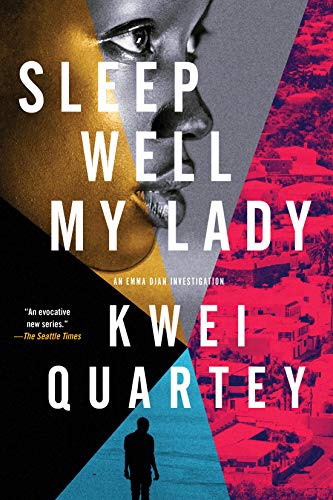